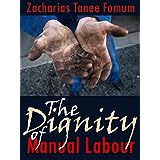 The Apostle Paul was not only a preacher and teacher of the good news. He was a man very much involved in dignified manual labour.

He further taught, “In the name of the Lord Jesus Christ, we command you, brothers, to keep away from every brother who is idle and does not live according to the teaching you received from us. For you yourselves know how you ought to follow our example. We were not idle when we were with you, nor did we eat anyone’s food without paying for it. On the contrary, we worked night and day, labouring and toiling so that we would not be a burden to any of you. We did this, not because we do have the right to such help, but in order to make ourselves a model for you to follow. For even when we were with you, we gave you this rule: ”If a man will not work, he shall not eat.” (2 Thessalonians 3:6-10).

The Apostle Paul was a self-sponsoring apostle. He earned his living by making tents. He was also a businessman. He would buy raw materials. He would make tents and sell them, and live on the profit he made. He was certainly a good tent-maker. He made tents that were solid and good to look at. He ensured that his tents were a credit to the gospel he preached. He was also a good businessman. He bought raw materials of the best quality. He bought them in such a way that both he and the person who sold to him felt good. He made the tents and sold them at prices that were beneficial both to the person buying and to himself. His business was based on a philosophy of mind and heart that constantly seeks mutual benefit in all interactions. He cheated nobody and he did not allow himself to be cheated. He took advantage of no one and he allowed no one to take advantage of him.

The Apostle Paul kept good business records. Had he not done this, he would soon have been out of business! He did not make his business a charity organization in which he just gave tents out to anyone who needed them or sold them to people at half the real value because that was all the money they had. It was honest business!

He did not pray that the Lord should lead him to find raw materials of excellent quality at 20% of the right price. That would have been wrong prayer because he would have been praying that he should gain and the one selling should lose! Righteous business must be mutually beneficial and mutually satisfying to all parties concerned!

The Apostle Paul worked with his hands and yet he did a phenomenal work. Could part of the reason for the poor performance of some of God’s servants in our day be their contempt for manual labour